WHO’S/ WHO IS GONNA?
Once upon a time a group of mice got together in council to discuss the best means of protecting themselves from the attacks of the cat. Several suggestions were made. After a while one of the mice with some clout among the group got up and spoke.
” Gentlemen I think I have hit on an idea, a plan which ensures our safety in the future. I hope it will meet with your approval. Here’s what we need to do, We need to fasten a bell around the neck of our enemy the cat. When he moves it will tinker  and warn one of his approaching.” Wow. Great idea. Each turning to another and nodding in approval.
Now one old mouse, Moses, he’d been sittin’ over in the corner chewing on cheese ask, “My fellow mouse men, may I speak?” The floor was given to Mr. Moses. “While I think this is a great idea I do foresee a problem,  an issue with such. ” One young whipper snapper jumped up and immediately said, “What, we have just had a great idea given to us and now you raise questions.” Ole Moses raised one of his paws, “Boys again this is admirable solution, but I do have one question—
Who is going to bell the cat?”, 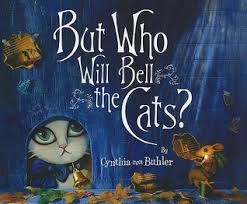