WALL OF REMEMBRANCE
Recently I saw something  I had never seen before and only wish we all could see more.
I was running a bit late. Quickly step in the door asked the lady how much is the ticket, she tells me five dollars. I pay the lady then think best get me some popcorn and a drink. After all its a basketball game, gonna be a good night, get to see two games for five bucks. It’s Friday night and this will be ballgames number six that I’ve seen this week. And hey two more tomorrow if all goes as planned.
(Franklin High School–Franklin,Tennessee)
I get my corn and drink and as I turn to walk toward the gym something caught my attention. Down a school hall way  in big letters it read on the wall very tastefully done “Wall of Remembrance.” I first thought well I guess this is kinda their tribute to famous athletes who have attended this high school. But generally acknowledgements like that read something like “Hall of Fame.” 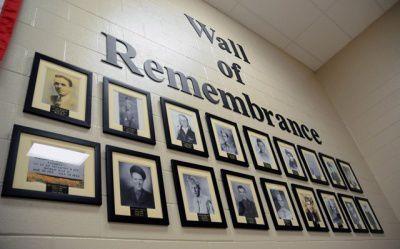 So I turned and walked in the opposite direction of the gym toward what read “Hall of Remembrance.” As I got closer I could see what it was. There on the hall of this school was a picture of every solider since WW II who had attended that school and lost their life in the service of their country, I then took some time to look and read of these ones who had attended Franklin High School, Franklin, Tennessee and killed in the service to their country. In my lifetime I have been in a lot of schools but have never seen such a tribute as this.
Along with the pictures was this quote:
“However horrible the incidents of war may be, the solider who is called upon to offer and give his life for his country is the noblest development of mankind.”
Douglas MacArthur
As a resident of the city of Franklin, I say thank you for such a remembrance. I only wish this was a practice in more communities.
==============================================
January  6, 2020
Keep on,
Larry Adamson