SIX LESSONS FOR POLITICS
Recently time found me returning to a book I had previously read. The book Tip and The Gipper.
Tip was Tip O’Neill, one time speaker of the House of Representatives from Boston. The Gipper was at the time President of the United States, Ronald Reagan.

Here were six points it was said that both of them tried to live by and believed regarding their political careers. Keep in mind they were of different political parties.
1.Both had been brought up to show respect  for positions of
authority.
2.Both preferred to play by the rules.   O’Neill realized Reagan had    won the presidency. He recognized he and his party had lost the      election.
3.Neither acted like spoiled kids who when losing yells, “It’s my         ball and  I’m takin it home.” Both believed in keeping the
process going.
4.Each understood the important rule of: “Always be able to talk.”
5.Each had the confidence to take counsel.
6.Both were growing not just older, but old and they knew it.
If each were going to leave their mark they would somehow have     to do  it  with the other. 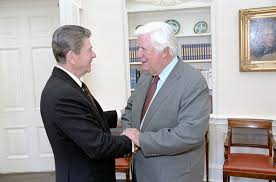 “What both men deplored more than each other’s  political philosophy was stalemate, and a country that was so polarized by ideology and party politics that it could not move forward. There were tough words and important disagreements….yet a stronger commitment to getting things done. They respected elections, accepted  who had won, knew that duty came with the office.”
Quoted from the book–Tip and The Gipper
=============================================
September 24, 2019
Keep on,
Larry Adamson