THE JUMP SHOT
Well this past Saturday I saw  my first basketball game of the 2019–2020 season. One of may, I hope. Last year saw nearly sixty games.
I was about half way through my popcorn and Diet Dr Pepper watching the kids warm up and got to thinking, “Every kid out there is taking the same kind of shot.” A jump shot. In fact in today’s game there is only about two types of shots, the jump shot and hook shot (which few players use.) 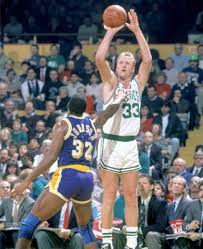 Larry Brid–Shooting over a defender

(Rick Mount–Purdue U–shooting a jump shot)
Got me to thinking. The earliest (1949)  basketball games I can remember seeing there was only two types of shots, the hook shot (George Mikan) and the set shot. The set shot was where both feet stayed on the floor and the player made his attempt in some type of throwing motion. The one hand set shot or in a few cases (Bob Leonard) two hand set shot. The most poplar of today the jump shot  would come on the scene in the early 1950s’..

(No 21 Bobby “Slick” Leonard)
If you do some research, as in the case with most sports matters, there will be debate about the matter of first and, “Who was the first one to shoot the jump shot?”
In Shawn Fury’ book Rise and Fire Wendell Smith is one of the people he associates with being the first. Smith ended up being a Detroit sportswriter, associated with helping Branch Rickey discover Jackie Robinson. Smith was a very good baseball player and played both sports at West Virginia State College in 1937. From there names such as John Cooper, Joe Fulks, Kenny Sailors, Glen Roberts, Barney Varnes, Jimmie James and Belus Smawley have all been associated with being first.
Maybe the question shouldn’t be so much as who was first, but why did a player change from the prescribed and always taught set shot. Why did he leave the floor in the first place. Was it because of a taller player guarding or just the creativity of one. We will never know.
Now you want to get an argument today ask the question: “Who is the greatest jump shot  player you ever saw?” Get ready.
As I sat there watching the kids I thought they all are doing something that once was never a part of the game and the game changed drastically when the jump shot came about.
Change eventually comes to about everything in life doesn’t it. Even our games.
==========================================
November 6, 2019
Keep on,
Larry Adamson