THE GAME IS YOURS
The game is yours, but not the victory.
A very successful 1955 Broadway play was Damn Yankees. The drift of the story is really what will one give up to be a “Winner.” Joe, Joe Hardy, what will he sacrifice to see his hapless Washington Senators win, beat them Damn Yankees. Night after night he sits and listens to his team lose. Then Joe is approached and offered, “You can do something about it.” But it will come at a cost.
You know sadly that is a theme I think in reality we have seen and still do today, what will one sacrifice to be a “winner.” Often without counting the cost.

This past week I shared with a few something that happened years ago when I was teaching and an assistant basketball coach at a high school. In a game in which we were playing players from the opposing  team did something in all my years I had never seen before. During play some of the opposing team players spit on some of our team during play. I don’t think I ever saw anything in sporting event that bothered me as much as that did.
I thought about that then and have thought about it since. You know if a coach is willing to allow his team, a player is willing to act in such a despicable manor, I wonder if maybe the competition should not end there. No I know that is not going to happen. But just maybe it would be better said to the culprits “hey if your value system is so messed up that you are willing to allow such, to  do such, then the game  is yours.” But what victory is there in such behavior.
I know in growing up in Indiana one would often hear in sports, when often excusing more than questionable behavior, “Yea but he’s a winner.” Oh really. But by whose standards. I guess it is true as they say, “Winning can cover a multitude of sins.” It may cover them, but I questions does it forgive them? Does it not foster such future actions and maybe even more so. 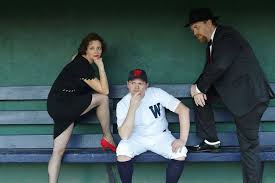 You know ole Joe Hardy was questioned about what he would give up, possible sell his soul for a pennant. I wonder how many times we have seen and excused bad behavior to achieve what some would call winning. So some could walk off a field, down some bleachers walking out into the night, claiming, “We won.”
One should try to make sure what they are trying to attain, win, is worthy to be obtained and the how they go about trying to attain such. Winning has been and will always be a matter of choice how one goes about trying to achieve. Over the years I have seen some given praise and the label of a “Winner” where I have thought otherwise.
In the long run winning is more than just scoring more points than the opposing team. My opinion.
==============================================
January 10, 2020
Keep on,
Larry Adamson