TEAR DOWN OR LEAVE UP? 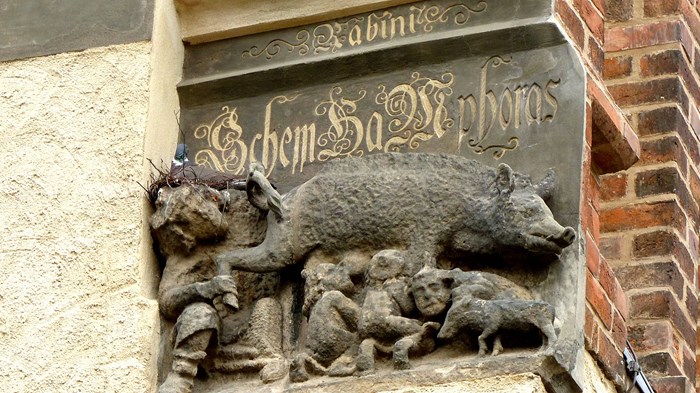 Recently as I visited the city of Wittenberg, Germany I found something interesting.
In Wittenberg there is a church dating back to the 1300’s. It is  called the The Town Church of St.Mary. It is the church where Martin Luther once served. It was the first church to celebrate the Catholic mass in language other than Latin doing so in the native tongue of Germany. Also, it was the first church where wine and bread were used in the celebration of the communion.

Near the top of that church near one of the steeples is a sculptor, a sand picture. It is a picture of a swine, a pig symbolizing and  placed there to show the hate for the Jews. It is a very unflattering piece, showing children sucking from the pig and other depictions of disdain for the Jews.

In recent times the city of Wittenberg has come under discussion about allowing the sculptor to remain on the building. Some saying it should be dissolved, removed in some way as it shows hatred for the Jewish people. Interesting the town fathers contacted the National Jewish organization in Berlin asking their opinion and what should be done about it being there.
The reaction of the Jewish organization, they told the city fathers, “You do not change history by removing it or taking it down, most definitely allow it to remain.” And thus it does.
Last week as we stood there looking  at the sculptor on the church  I could not help but think about what is taking place in my country, the United States. Today, about certain statues, symbols in certain places. I know for example in the state of Virginia and the city of New Orleans certain Civil War statues and symbols some have demanded they be removed and they have. Many other places also are now under demand by certain ones, certain groups to have them removed.
Interesting one country and from the very group the picture of hate is directed says, “Leave them up, you don’t erase history, you teach from it.” Another group says “Tear them down, don’t allow to continue to appear.”
One of my favorite authors  is Rick Bragg. In interviewing a mother about the tragic death of her small son he asked her “Why do you want this story told?” She had a classic answer I thought. She said; “Peoples remembers it, peoples forgets it if it ain’t wrote down.”

I’m not too sure that some times we need to not only read but we need to “see” to remind us of what was. Seeing a statue of Joseph Stalin in Red Square does not necessarily cause everyone to “honor” him, it can remind one of who he was, what happened when he was, and what he did.