Rivalry–A definition: Competition for the same objective or for superiority for same field.
The Vincennes Alices vs the Jasper Wildcats.
Rivalry is a word often associated with sports. Over the years I have heard of many rivalries. Some quite heated. Even been involved in a few. I remember moving into a community where I had mentioned to another person about living in a certain community in that county. To which that person said: “If I had to choose between hell and living there, I would choose hell.” Knowing the guy like I did it went back to his Indiana high school basketball days. The community where he grew up and the other had a history of a strong rivalry in basketball.
Orlando Gunner Wyman was a high school basketball coach in Indiana. A very successful one. Winning the state championship at Vincennes in 1981 and later being voted into the Indiana High School Basketball Hall of Fame. Wyman coached a number of years first in Kentucky and later Indiana. A school where I was an assistant coach, we once played his Vincennes team. He was a good coach and I’ll just leave it at that.

(Orlando Gunner Wyman)
Vincennes High School, (Vincennes, Indiana) and Jasper High School (Jasper, Indiana) had a heated rivalry during the years Wyman was at Vincennes. That is putting it mildly.  If one thinks they did not basketball rather seriously in some Indiana communities then take note. Take note of what Wyman had put on his tombstone upon his death. Maybe only in Indiana. 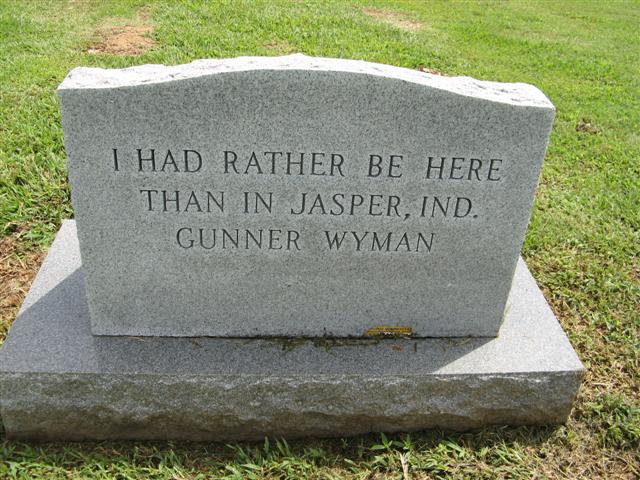