OMAR BRADLEY
Years ago I was fortunate to be on the campus at West Point and attend a function that was honoring the WW II General Omar Bradley. 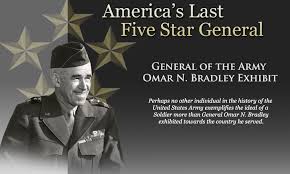 Bradley was a special kind of person. He was considered a General’s general. He got the job done with little fan fare. It was said that Eisenhower was very fond of Bradley. He was the one Ike could go to and know he would carry out instructions he had been given and do it with little return grief to his superiors. He was the opposite of George Patton in most ways.
“Omar Bradley was a regular guy who rose through the ranks by hard work and ability. He succeeded, not by cutting a dashing figure or garnering outrageous press, but by persevering. He was personable, intelligent, knowledgeable about war, and certainly brave, but it would be hard to say that he had more of theses qualities than anyone else in the Allied command. He simply put his assets to  work. If the Army benefits from having a Patton, it truly succeeds when it has a Bradley to advice hi, direct him and supply him.”
Omar Bradley=General at War—Jim DeFelice
I like that thought: “if the Army benefits from having a Patton, it truly succeeds in having a Bradley.”
You know so often today we see the limelight cast on someone for something significant they have done but we often fail to realize that it took more than just them. LeBron James had to start somewhere on a basketball court of some type with someone helping. No singer goes on stage and knocks their audience out without someone’s early interest and help. It would do us all well to remember when someone is standing in the spotlight, taking their bows, there have been others standing back stage so to speak having made much of this possible.
The author, Philip Gulley said it well:
“None of us ever get anywhere except through the kindness of others. Sometimes we boast about being self-made, but that is just a lie we tell ourselves to feel important. We’re all indebted to someone.”
==============================================
February 4, 2020
Keep on,
Larry Adamson