The very first record I ever bought was a Little Richard record. Ordered it from Randy’s Record Store in Gallatin, Tennessee. John “R” and “Hoss” Allen used to advertise Randy’s on their late night WLAC station out of Nashville. 1510 on your dial. About ten at night up in Indiana we could pick-up the stations signal. It was like going to another land.
It was on the Specialty Label, black and yellow label. I think it was actually a 78 rpm record. I can remember how excited I was when I picked it up at the local post office and Al Van Dyck handed it to me across the counter. Almost ran home, slapped that baby on my record  player turned up the volume and thought this was some of the greatest sounds I ever heard. Richard always had a strong horn section. So what I could not understand everything he was saying, what made the difference.
“Who is that?” A night or two later I had moved my record player out on our screened in front porch. It was summer and we spent a lot of time out there. I had ole Richard cranked up when my dad walked out on the porch, looked at me, looked at the recorder player and said, “Who is that, what is that?” I quickly said, “That’s Little Richard.” I said such surely in such a way that anyone would like Little Richard. His only reply, “Well turn Little Richard down, the whole neighborhood doesn’t need to hear him.”
“Well it’s Saturday night and I just got paid, fool
about my money, don’t try to save.”
The last time I saw Richard perform was a few years back. I had driven my old corvette to Green Bay, WI for a three day old car and rock-n’-roll show at an Indian casino. Three nights of Little Richard. He was recovering from hip surgery. Coming on stage, “Ok folks, Little Richard may not be able to bop, but he still can rock.” And he did. With the exception of Jerry Lee Lewis I saw him more times than any other performer. And perform he could, like no other.
One night after a show in Green Bay I sat with one of his horn players. Fella had been a member of the group The Upsetters so he went way back with Richard. I asked him, “What’s it like playing with him.” I never will forget his look, he smiled a bit, turned his head and said, “If I tried to tell you, you would never believe me.” 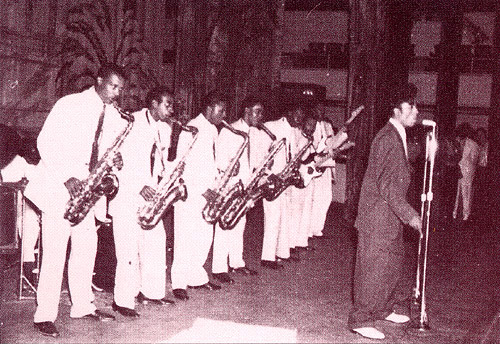 Sadly this past week, May 9th Little Richard, Richard Penniman passed away. Born December 5th, 1932 in Macon, Georgia. It is said he was discovered in Macon while washing dishes at the bus station.
The last time I saw Little Richard was by chance. I was waiting for an elevator at a hotel in downtown Nashville. The elevator door opened and who should be standing there, but him. Walking a bit with a cane. I looked at him, taken back and I kinda softly  said , “Little Richard, Little Richard.” He did not miss a beat, smiled, nodded my way and as he walked by me said, “In the flesh baby, in the flesh.”