HE CHANGED THE GAME
James Naismith may have invented the game but Ed Seitz forever changed the game of basketball.
Steitz was the secretary-editor of the NCAA Rules Committee in the mid-1980s’. He had previously been a basketball coach and athletic director  in Springfield, Massachusetts. Interest enough the same place where in 1891 James Naismith invented the game of basketball. One created the game another changed the game.
Steitz sent out questionnaires to every coach in the college game from Division I to NAIA, junior colleges and all points in between. With this information he collected he then persuaded the 12 person Rules Committee  to adopt the three-point shot. 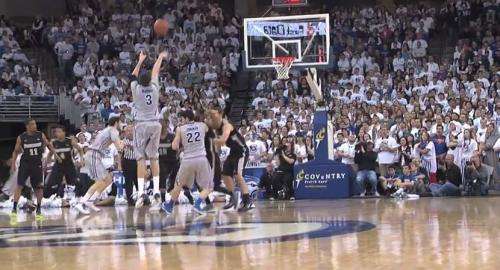 Interesting Steitz must have been quite a negotiator as he did not have a vote on the committee. His job was to gather and present the information. The three point rule was introduced into the college game for most all conferences in 1986. Ronnie Carr of Western Carolina is credited with hitting the first three point basket in college ball. His school’s conference had all ready adopted the change.
It was not a slam dunk in the early days. In 1986-87 the National Association of Basketball Coaches voted 65%–35% against the rule change. Such tags as “Mickey Mouse” rule was often said. Many prominent coaches spoke  out against the rule. Steitz died in 1990 and by then his change was much embraced by most coaches and certainly the fans.
We Hoosiers often wonder how many points Rick Mount or say Pete Maravich would have scored had they played during such a rule. Personally when I think of the three point rule my mind goes to the gunner from Kokomo, Indiana. Jimmy Rayl. Rayl shot the ball from the parking lot.
Or how about the night in New Castle, Indiana and the famous shoot out between the two high school players, Ray Pavy and Jimmy. Pavy scored 51 points and Rayl 49. No three pointers in those numbers. Later at Indiana Rayl would score 56 points in two separate games. Again no 3 pointers.
Today the three point shot is often the major thrust of a teams offensive. This past year I once watched a game where a player had received the ball well inside the three point line. He turned, dribbled back some feet so as to be behind the line and fired away. The ball tickled the twine. He made the basket.
=========================================
November 3, 2019
Keep on,
Larry Adamson