GREATLY IMPRESSED
Recently someone ask me, “Larry, what’ the most impressive thing you have ever seen or witnessed?”
That question took me back a bit. “I’d have to think about that one for a while,” I answered. The most impressed thing I ever saw or witnessed. Later I got to thinking seriously about that question. Hum. Fair question isn’t it.
I have been fortunate to be in the presences of a number of well known, or famous sports people. I once was in the presences of one who would later become president, another vice-president. (Very briefly in presences I must say) Been in the presences of some Hall of Fame sports people, both baseball, basketball and golf.
I must say witnessing, being in the delivery room with Dr.Beardsley for the birth of our third child was something very special. Something I have never forgotten. I think I even later told my wife, “I will see that you never get in that situation again” ??. 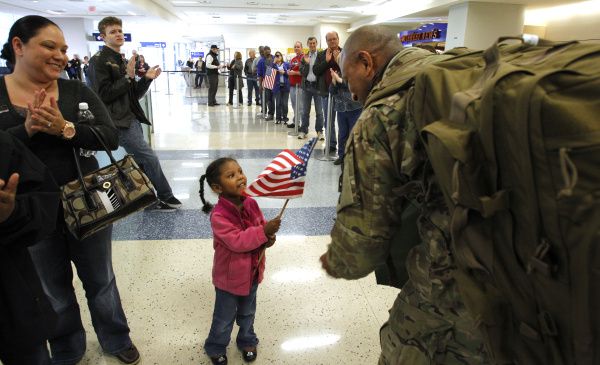 But one of the most impressive things I ever saw, a witness to was something completely unplanned and came on me quite quickly. Shortly after I retired from the United States Golf Association our son and I took a trip we had planned for sometime. We took a trip to Europe met up with a group of about twenty others and for the next twelve days we recreated the journey, the route of the American solider in WW II. A D-Day journey. From the beaches of Normandy, the Battle of the Bulge and all the way to the city of Berlin. An amazing trip
Our son and I were  in the airport in Atlanta,GA waiting on our flight from Atlanta to Paris, France where we would begin our planned trip. He and I were sitting in the waiting area to board the flight a bit later. I walked from the waiting area to get a cup of coffee, planning to get the coffee and come back and sit. At first I heard a noise, very slight, but attention getting. As I walked the hall the noise began to rise. I began to hear a smattering of applause. I even heard some small cheers and a whistle.  Now the noise was increasing in volume. And then I saw it. Rounding the corner now walking toward me in the hall way of the airport was a group of army soldiers, Sixty possibly seventy in number. (Later my son would tell me they were from Ft.Benning, GA and were now being deployed over seas. Ft.Benning is where he took his basic training. An experience he has never forgotten.)
They were not in any particular marching order just walking as a group, two or three abreast. They were all neatly dressed in uniform, cleanly shaved, boots shinned, short haircuts.  Seeing something like that I understood the expression, “The best and the brightest.”
As they made their way down the hall the noise, the applause rose to a loud crescendo, you would hear shouts.  Everyone’s attention was now diverted on these young men, people stopped. I saw a man, who had been sitting at a bar adjacent to the hallway get up, walk to the side of the hall, raise one hand in the air, then put  two fingers to his mouth and do a loud whistle. I saw a grandma lookin’ lady walk up beside one of the young men then hug and pat  him on the shoulder. I saw more than one of these young men be given a fist pump as they walked down the hallway. The applause lasted until the young men turned a corner and walked another hallway to their destination.
We all knew that destination would be boarding a plane for places where things happened that none of us would want to see and experience.
And think my son and I were waiting to board a plane taking a trip that many years before young people as these had also gone to places unknown and given a sacrifice so we could have the privileges and choices we do today.
Yes, oh yes I do know what was one of the most impressive things I ever saw. It happened  in an Atlanta airport. Wasn’t I lucky.
==========================================
December 29, 2019
Keep on,
Larry Adamson