FOOLISH AFTERWARDS
Have you ever felt foolish after something happened? You learn something later that you did not know at a previous time and it made you feel foolish? Foolish after the fact? Well I have and one of the times it happened was this week.
Let me begin at the beginning. I love old cars and recently as my wife and I will be moving and the need for downsizing I was in the process of selling one of my old cars, a 1947 Studebaker.
A lady called me recently asking if I still had a Studebaker for sale and if so could she  come and see. I told her I did and she was welcome to come and see. She said she would be there in a couple hours and would bring her pick-up and trailer. After hanging up I thought it a bit strange a lady and that pick-up truck and trailer business.

About an hour later she pulls up in front of our house pick-up and trailer in tow. We begin talking and  I thought this lady sure knows cars and talks car language. She showed me on her phone six or seven cars some really old (1941 Chevy) she has. I did ask her what she did for a living she casually said “Oh I’m a musician, I sing and play piano some.” I thought that’s cool and nothing further was said regarding. Bottom line she liked and bought the car.

(Kandace and her dad–Scat)
With the ease of a veteran garage person she backed her truck in place, we pulled the car on the trailer, and she four corner tied the car down with the grace of a dock worker. I thought wow this young lady is something. Crawling in and out and under the car with rapid pace. Car tied down she took a last picture of me standing by the car, shook hands and with that she pulled away from my drive car in tow.
Later in the day working at my desk I thought I’ll just goggle her name, that musician bit got me. This I did and to my surprise she is a musician, a singer. More than just that a well known world wide traveled performer. She has recorded two successful cd’s on the well known jazz label, Blue Note, “Soul Eyes” and “Indigo.” Appeared on all the late night shows from Letterman on. Just recently toured Europe and played London. On her last cd Nora Jones appeared with her and get this was ask by Prince to perform with him. Reading all this I about swallowed my ice tea. We had been just two people liking old cars. 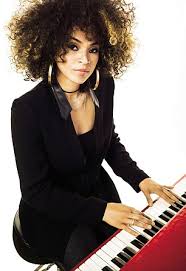 And me I did not have a clue who she was. I did tell her, “Hey if you play anywhere around Nashville call me, my wife and I and I’ll bring our granddaughter and will come and see you.” Yeah, like I might be doing her some favor. She was so nice and unassuming. She just told me she liked old cars and so we had that in common and I was ignorant of her talent and success. Her name Kandace Springs, If you go on youtube you will find her often.
Kandace you were so gracious of my ignorance of who you were and your talents. I hope you enjoy the Studebaker. Tomorrow I am going out and buy one of your cd’s.
“Still awake and I’m feeling your scar start to fade
when you’re not in my arms.”
========================================
December 11, 2019
Keep on,
Larry Adamson