Just some thoughts:
DRIVE
On the way home today from the golf course I slipped in a Alan Jackson cd. Thus the roots for these thoughts. You might want to scroll down and read the last couple paragraphs of my encounter with Steve. I’d pay some $$$ today if I could see ole Steve.
Alan Jackson once sang out it. But if you were ever a young boy growing up in a rural setting you probably lived it.
I can remember when I was a young boy how on a Friday night my dad would often say to me, “Tomorrow we need to go to Calvin’s barber shop in Farmersburg and get you a hair cut.” Now getting a hair cut did not do anything for me. But what would often happen on the way home from the barber shop would.
Just an old half ton shortbed Ford
My uncle bought new in ’64
Daddy got it right ’cause the engine was smoking
A couple of burn values and he had it going
He let me drive her when we’d haul off a load
On the way to Farmersburg to Calvin’s barbershop my dad would take the main road, Highway 41. Drive by Wood’s lake, Suwannee Orchards, Bud’s gas station, the White Swain and then turn left into town. Bud had the biggest dog you would ever see, Jiggs. Jiggs was a Great Dane and big enough you could ride. Jiggs once ran out in front of a car thus Jiggs had a leg in a cast for long time.
But on the way home if all went as I hope we would take the back road home, about a ten mile ride on an old gravel road. Just before getting on that gravel road my dad would say to me, “You wanna drive?”  You can imagine my answer. The earliest of times I would have been no more than eleven or twelve years old. I would sit between my dad’s legs, move up as far as I could in the seat so I could touch the pedals and the gas.
I’d sit up in the seat and stretch my feet out to the pedals
Smiling like a hero that just received his medal
It was just an old hand-me-down Ford
With a three speed on the column and a dent in the door
A young boy two hands on the wheel
I can’t replace the way it made me feel
And I would press the clutch
And I would keep it right
He would say “a little slower son/You’re doing just fine
Just a dirt road with trash on each side.
But I was Mario Andretti
When daddy let me drive
It was just an old worn out Jeep
rusty old floorboard, hot on my feet
A young girl two hands on the wheel
I can’t replace the way it made me feel
“Straighten up girl, you’re doing just fine”
Just a little valley by the river where we’d ride
But I was high on a mountain
When daddy let me drive 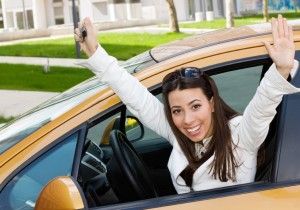 Can you remember your earliest experiences of learning to drive? Or later teaching your kids?
This is one of the best stories that every happened to me in my coaching and teaching days.
Among other things I taught when I taught high school was driver’s training.
(Oh my) I once said to a kid, as he sat behind the wheel driving in my driver’s training class, “Steve, I wish I had this type of attention from you in my history class you are in. I never will forget his response:
“Well Coach, in all due respect, the way I figure it that history class will not do nearly as much for me as learning how to operate these                    sets of wheels will do for me on a Saturday night.”
I had no come back for my boy Steve. I wanted to tell him that once upon a time I had similar feelings.
“I felt like Mario Andretti when daddy let me drive.”
===============================================April 30, 2020
Keep on,
Larry Adamson