Sometimes when one does not know what to say  maybe  the best thing to do is “hit a foul ball.” When in doubt, deflect.  Let me explain this way. 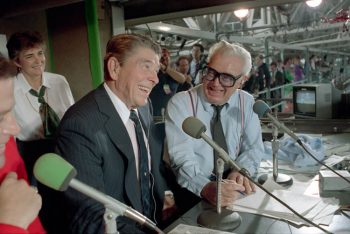 In the early days of baseball broadcasting often it was done by wire. In other words a person sat not at the ball park but in a radio studio and took the happenings of the game by wire. Games were re-created. President Ronald Reagan was once such a broadcaster, He broadcast over six hundred games Chicago Cubs games by re-creation in a studio.
One such broadcast the wire went dead. No information coming to him as to what was happening as the player was at bat. The wire had gone dead and he had told his audience and “the ball is on the way to the plate.” Wire dead. Now what?
He thought there was one thing that doesn’t get in the score book. Quickly he said to his audience, he called the player by name and said, “and he foul’s off the first pitch.” Not only did he report the foul ball but went on to describe how it was fouled down the third base line into the crowd and now two little kids were fighting over the ball for a souvenir.
This past Mother’s Day I was reminded of a re-creation of a foul ball my mother served up to me. Mom was in a care facility, her mind failing. I had gone to see her taking my wife Barbara with me. As we stood over mom’s bed I said to her, “Mom look here who is with me, do you know who this is?”

Mom’s wires may have gone dead but Ronald Reagan had nothing on her. She looked, smiled and you could see the wheels turning. Lights were going off but troubling connecting. Then she said to me: “Yes, yes I do I know who that is, it’s someone I love.